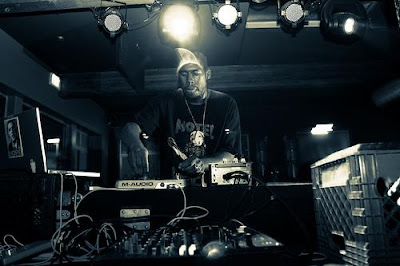 The head-turning fourth album from Flying Lotus, Cosmogramma, was arguably the L.A. beat-wizard's magnum opus, but it also left some fans out in the cold. Some found it too layered, too dense, too artfully tangled. But no matter how it hit you, it proved just how far Flying Lotus was willing to go to break new ground. The latest Lotus excursion, "Caravan of Delight", comes to us courtesy of Let the Children Techno, a compilation from the dance-minded people at Ed Banger. But for those of you looking for a return to the knock- FlyLo of the Los Angeles era, you're in the wrong line.

It's a to Ed Banger that they would would let him contribute a track as floral and mysterious as "Caravan of Delight" on such a movement heavy mix (granted, it falls in the closing ). Not that "Caravan of Delight" doesn't move-- it snakes cautiously and curiously, as Flying Lotus builds around a delicate keyboard piece that creeps with such intrigue and uncertainty, it feels like theme music tailor-made for the Cheshire Cat. Trademark skitters and ticks pull the track along, but there's a refined lushness that begins to unfold as FlyLo's subtle detailing-- flutters and twinkles and round, plodding bass notes-- begins to bloom. It's the part in the story when the walk through the woods begins to feel less ominous, as all these bright little creatures start inching their way out of the trees.-pitchfork.com

[from the Let the Children Techno compilation; out on Ed Banger]